Biographies of the Secretaries of State: Henry A. (Heinz Alfred) Kissinger (1923–) 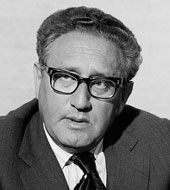 Kissinger was born as Heinz Alfred Kissinger in Germany. After the Nazis seized power, state sanctioned anti-Semitism made life for the Kissinger family, which was Jewish, very difficult. In 1938, Kissinger’s family immigrated to the United States and settled in New York, and Kissinger’s name was changed to Henry.

During World War II, Kissinger became a naturalized citizen and served in the U.S. Army as a German interpreter. After the war, he attended Harvard University, earning a B.A. in 1950 and a Ph.D. in 1954. He stayed at Harvard to join the faculty and in 1957 he became the Associate Director of Harvard’s Department of Government and Center for International Affairs.

Throughout the 1950s and 1960s, he served as a consultant to several government agencies, including the National Security Council’s Operations Coordinating Board, the Department of State, the Operations Research Office, and the Arms Control and Disarmament Agency. In 1968, President-elect Richard Nixon chose Kissinger to be his National Security Adviser.

After working closely with Nixon during his first presidential term, Nixon decided to make an unprecedented move by appointing Kissinger as his new Secretary of State while also keeping him in the role of National Security adviser.

Kissinger entered the State Department just two weeks before Egypt and Syria launched a surprise attack on Israel. The October War of 1973 played a major role in shaping Kissinger’s tenure as Secretary. First, he worked to ensure Israel received an airlift of U.S. military supplies. This airlift helped Israel turn the war in Israel’s favor, and it also led members of the Organization of Petroleum Exporting Countries (OPEC) to initiate an oil embargo against the United States. After the implementation of a United Nation’s sponsored ceasefire, Kissinger began a series of “shuttle diplomacy” missions, in which he traveled between various Middle East capitals to reach disengagement agreements between the enemy combatants. These efforts produced an agreement in January 1974 between Egypt and Israel and in May 1974 between Syria and Israel. Additionally, Kissinger’s efforts contributed to OPEC’s decision to lift the embargo.

On August 9, 1974, the Watergate scandal compelled President Nixon to resign, but Kissinger stayed on in his dual roles under President Gerald Ford. Kissinger helped Ford acclimate to the international scene and both men worked to continue policies implemented by Nixon and Kissinger previously, including détente with the Soviet Union, establishing relations with the People’s Republic of China, and negotiations in the Middle East.

Kissinger also played a major role in the negotiations leading to the August 1975 Helsinki Accord, an agreement signed by 35 countries and addressing many issues that promised to improve relations between East and West. In September 1975, Kissinger helped conclude a second disengagement agreement between Egypt and Israel that moved both countries closer to a peace agreement.

Kissinger’s tenure as Secretary comprised many controversial issues, including his role in influencing U.S. policies towards countries such as Chile and Angola. Additionally, he engaged in new international issues such as law of the sea, which became more prominent for U.S. foreign policy in the decades ahead.