Biographies of the Secretaries of State: Walter Quintin Gresham (1832–1895)

President Grover Cleveland nominated Walter Quintin Gresham to be Secretary of State on March 6, 1893, and Gresham entered into duty on March 7. Gresham died in office on May 28, 1895. 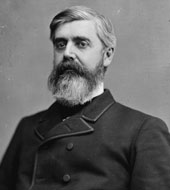 Gresham was born in Harrison County, Indiana, on March 17, 1832. He attended Indiana State University, subsequently studied law, and was admitted to the bar in 1854. He entered politics and won a seat in the State legislature as a Republican in 1860.

During the Civil War, Gresham served as a lieutenant-colonel in the Union Army, and eventually rose to the rank of brevet major general. In 1866, after returning to civilian life, he served as an Indiana Agent of State, managing the state debt.

Gresham was defeated in races for the U.S. Congress in 1866 and 1868, but was appointed U.S. District Judge for Indiana by President Ulysses S. Grant in 1869. Gresham left his judgeship when he was appointed Postmaster-General by President Chester A. Arthur in 1883, and served in that capacity until 1884, when he became Secretary of the Treasury for the remainder of the Arthur administration.

Gresham ran as a candidate for the Republican Party presidential primaries in 1884 and 1888. In 1893, President Grover Cleveland (a Democrat) in a bipartisan gesture asked Gresham to serve as Secretary of State. Gresham, dissatisfied with the direction of the Republican Party, accepted Cleveland’s offer.

As soon as he assumed his position as Secretary of State, Gresham began investigating the circumstances surrounding the failed U.S. attempt to annex Hawaii under his predecessor, John W. Foster. Gresham’s investigation showed the direct involvement of U.S. diplomats in the overthrow of Queen Liliuokalani. On the advice of Attorney General Richard Olney, President Cleveland decided to withdraw the treaty of annexation before the Senate. Since the Queen’s overthrow was essentially a coup by pro-American sugar planters intent on eliminating Native Hawaiian political power, Cleveland hoped to restore Liliuokalni to power. However, the Senate declined to give Cleveland the authority to do so.

Gresham also worked to counter British influence in the Americas, citing the Monroe Doctrine as his guiding principle. He warned Julian Pauncefote, the British Ambassador to the United States, against British involvement in an 1895 royalist Brazilian coup attempt. However, when the Nicaraguan President José Zelaya attempted to exert a Nicaraguan claim to the Mosquito Coast in 1894, Gresham worked in concert with the British Government to ensure the continued commercial privileges of resident Americans in the region. The U.S. Government would later intervene to remove Zelaya from power in 1911.

In addition to his attention to Western Hemisphere concerns, Gresham encountered ongoing problems regarding the status and treatment of U.S. citizens in the Ottoman Empire. The Ottoman Government, at times, refused re-entry of emigrants who had become U.S. citizens. Gresham found that his attempts to secure rights for U.S. citizens, particularly during a time of Turkish-Armenian tensions, were rebuffed by Sultan Abdulhamid II. Gresham tried to walk a fine line between doing what was possible for U.S. citizens in the empire, while continuing a policy of non-intervention in European affairs, particularly those concerning the internal affairs of the Great Powers. This sensitive position led Gresham to reject calls by missionaries for a U.S. naval base in Smyrna.

Gresham’s tenure as Secretary of State was cut short by his unexpected death on May 28, 1895 in Washington, D.C. Owing to the suddenness of his death, President Cleveland did not appoint a replacement until June 8.