Biographies of the Secretaries of State: William Rufus Day (1849–1923)

William Rufus Day was appointed Secretary of State in President William McKinley’s Cabinet on April 26, 1898. He entered into duty on April 28, 1898, and served until September 16, 1898. 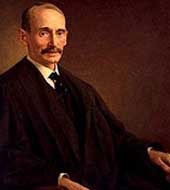 Day was born in Ravenna, Ohio in 1849 to a long line of distinguished jurists. He decided early in life to study the law. He attended preparatory school and graduated from the University of Michigan in 1870. He returned to his hometown of Ravenna the following year to read law in the office of a prominent local judge before completing a final year at Michigan.

Day was admitted to the Ohio bar in 1872 and began his practice that year in Canton. While there, he befriended the future president, William McKinley. A successful lawyer, Day was elected judge of the Court of Common Pleas in 1886. Three years later, he was appointed district judge for the northern district of Ohio, but poor health forced him to resign this position before he entered into duty.

Day assumed the position of Secretary of State just a few days after the start of the Spanish-American War. Although he was not known to be an especially skilled diplomat, Day worked tirelessly to secure the neutrality of Europe during the war. The Spanish-American War dominated his tenure, as well as the annexation of Hawaii.

Day had agreed only to take the position of Secretary of State until the end of the war, and submitted his resignation shortly after the peace treaty with Spain was signed in 1898. As the U.S. representative to the peace conference in Paris, Day successfully negotiated with Spain the ceding of Cuba, Guam, the Philippines, and Puerto Rice to the United States for $20 million.

President McKinley’s foreign policy aims were largely carried out by Day with little conflict. Day's only objection in the Spanish-American War peace settlement was the annexation of the Philippines, yet he honored McKinley’s wishes.

After resigning as Secretary of State, he transferred his duties to John Hay. Shortly after, Day returned to the legal profession. President McKinley appointed Day judge to the Sixth Circuit Court of Appeals. He served there until 1903, when President Roosevelt nominated him Associate Justice of the U.S. Supreme Court.

Day enjoyed a long and distinguished career in the Supreme Court, serving nearly 20 years. He resigned due to failing health in 1922. Justice Day died the following year.