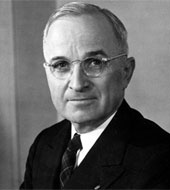 President Harry S. Truman
When Harry S Truman became President in April 1945, much of Europe and Asia lay in ruins. Although the Axis powers had been defeated, an ominous new threat appeared on the horizon. The United States and the Soviet Union, who were allies during World War II, emerged from the war as global powers, increasingly in conflict with each other. By 1947, efforts to maintain cooperation between Washington and Moscow had broken down completely. President Truman, working closely with two assertive Secretaries of State—George C. Marshall (1947-1949) and Dean G. Acheson (1949-1953)—took decisive steps to contain Soviet expansion in regions in which the United States had vital interests. The United States was about to enter a new kind of war: the “Cold War.”