Although the expansion and reorganization of the Department were significant factors, the most distinctive feature of the early 20th century was a strong movement toward fully professionalized and democratic foreign services. America’s new position in the world forced the nation to recognize that amateurism in the conduct of foreign policy could be costly. One critic wrote, “As we would not put a ship into the hands of a commander ignorant of navigation, an army under the control of a general without military training, a suit at law into the hands of a counsel who never opened a law book . . . so we should not put the foreign affairs of our government into the hands of men without knowledge of the various subjects which go to make up the diplomatic science.” 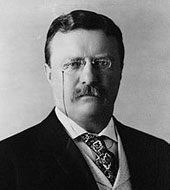 President Theodore Roosevelt
President Theodore Roosevelt agreed and emphasized the need to upgrade diplomatic performance: “The trouble with our ambassadors in stations of real importance,” he told a friend, "is that they totally fail to give us real help and real information, and seem to think that the life work of an ambassador is a kind of glorified pink tea party.”

The domestic spirit of “progressivism” and an emphasis on good government fueled the demand for change in the Diplomatic and Consular Services. A truly professional foreign service meant that the practices of the past would have to end. The spoils system would have to be replaced by competitive examination and guaranteed tenure; the merit system would have to be adopted as the basis for award of pay increases and promotions, and pay and allowances would have to be adequate to the job. As President Roosevelt told a friend in 1908, “I am anxious to have it understood that it is not necessary to be a multimillionaire in order to reach the highest positions in the American diplomatic services.” Or, as Representative Frank O. Lowden of Illinois expressed it, “It ought to be possible for the lowest man in the foreign service to feel that it is within his power, if his service justifies it, to reach the highest post.”

President Grover Cleveland
President Grover Cleveland anticipated the reform movement in 1895, when he issued an executive order that made appointment to most positions in the Consular Service contingent upon passing written and oral examinations. Unfortunately, the reform was short lived because the President himself selected the individuals who would take the examinations. When President McKinley took office and was determined to appoint his own consular officers, Cleveland’s executive order was ignored. Only one person out of 112 applicants failed the tests. When Elihu Root became Secretary of State, he noted, “It has evidently come to be regarded as cruel and inhuman treatment not to pass a man. In view of the character of the examination, a rejection would practically be an imputation of idiocy.”

Presidents Theodore Roosevelt and William Howard Taft took the most serious steps toward reform. In November 1905, President Roosevelt established competitive entrance examinations and the merit promotion system for all diplomatic and consular positions except those of minister and ambassador. His Secretary of State, Elihu Root, shepherded a law through Congress that created a grade classification system for consular positions and also provided for the inspection of consular establishments every two years. However, this statute did not mention President Roosevelt’s reforms; Roosevelt remedied this omission by means of another executive order issued in June 1906. 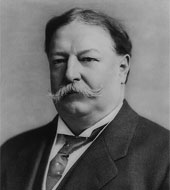 President William Howard Taft
During his Administration, President Taft set up a board of examiners to administer both oral and written examinations to prospective diplomats. He also ordered that vacancies in the higher ranks of secretaries of legations and embassies be filled only from within the career service and that for the purposes of retention and promotion, the efficiency records be maintained for every diplomatic officer and clerk in the Department. While these measures did not include ministers or ambassadors, both Roosevelt and Taft rewarded several secretaries with appointments as chiefs of mission. Taft, for instance, promoted 18 from the diplomatic service to ministerships or ambassadorships.

American missions overseas were also subject to reform. It became clear that there was a need to establish and maintain embassy and legation buildings appropriate to the nation’s new status in international affairs and business. As one reformer argued, “All men, rich and poor, cultivated or uncultivated, are impressed by appearances. Foreigners necessarily judge us by what they see of us in their own country. We pride ourselves on being the richest people on earth and declare loudly that nothing is too good for us. And yet we are content to cheapen ourselves among the nations of the earth by the shabby showing we make among them in respect to our embassies. We feel ashamed at appearing poverty-stricken in the eyes of the inhabitants of other countries and of placing ourselves commercially below third or even fourth rate powers.”

Similarly, a former attaché promoted the enhancement of U.S. facilities abroad so that “traveling Americans will no longer be mortified at the sight of the United States embassy or legation being located on a single floor in an apartment house or office building with a tin shield over the door far inferior in appearance to that of many a butcher or baker in the vicinity.” In response to the rising complaints, Congress took a step forward when it passed the Lowden Act (1911), the first legislation to provide for the purchase of buildings to house overseas missions.