Rapid change in Europe was mirrored by equally complex problems in China, South Asia, and the Korean peninsula. In the People’s Republic of China, tanks and troops attacked pro-democracy demonstrators in Tiananmen Square in June 1989, effectively suppressing the movement. Media coverage of the suppression made a powerful impression, as nations around the world realized that China was not prepared to follow the Soviet Union and Eastern Europe and allow its people more freedom. The United States joined the protest of many other nations by imposing economic sanctions and condemning the suppression and killing of the pro-democracy demonstrators.

"The Goddess of Democracy" erected in Tiananmen Square during the protest.

In an effort to improve U.S. relations with China, Bush sent Deputy Secretary of State Lawrence Eagleburger and National Security Adviser Brent Scowcroft on a secret trip to China in July 1989. When word of their visit became public several months later, the President was criticized for pursuing “constructive engagement” with the Chinese Communist government so soon after the Tiananmen Square killings and his announcement of a U.S. ban on all high-level talks between the two countries.

Unlike the serious human rights abuses in China, the changes taking place in South Africa signaled a peaceful end to the practice of apartheid. Secretary Baker described U.S. policy as a “classic carrot-and-stick strategy,” in which the Department of State issued threats of continued sanctions as well as invitations to the United States to both black and white South African leaders as incentives to end apartheid. The Department’s African Bureau took the lead. Assistant Secretary of State for African Affairs Herman Cohen met privately with South African President F.W. de Klerk to inquire whether he was prepared to end apartheid. 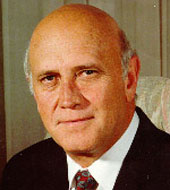 By late 1989, de Klerk had desegregated many public places, released numerous African National Congress (ANC) and other anti-apartheid political prisoners, and discussed black-white power sharing. A few months later, de Klerk released Nelson Mandela from prison after 27 years of incarceration. Mandela proved to be a potent symbol of national healing, respected by most blacks and whites in South Africa. Recognizing that the government was on a course toward a nonracial, multiparty democracy, the ANC soon ended its policy of armed struggle against the South African Government.

The Department of State’s African Bureau also played a critical role in bringing about the end of the proxy war in Angola between the pro-Soviet and pro-U.S. factions. In the spring of 1991, Cohen conducted negotiations with the Soviets that ended more than 20 years of support for guerrilla warfare between contending groups, although peace remained elusive in that war-ravaged country.