It was also inevitable that the policy of containment would develop a political-military dimension. In June 1948, Senator Arthur H. Vandenberg of Michigan sponsored a resolution in the Senate that called for the “progressive development of regional and other collective arrangements for individual and collective self-defense in accordance with the purposes, principles, and provisions of the [United Nations] Charter.” 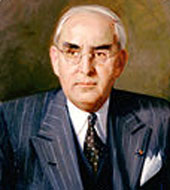 President Truman had already applied the principles of containment to Latin America. The Rio Pact, signed in September 1947, provided that “an armed attack by any State shall be considered as an attack against all the American States and, consequently, each one of the said Contracting Parties undertakes to assist in meeting the attack.” Collective security was invoked again in the North Atlantic Treaty. Signed in Washington in April 1949, it created the North Atlantic Treaty Organization (NATO). The Rio Pact and the NATO Alliance formally marked the end of George Washington’s policy of no entangling alliances. Economic assistance and collective defense agreements became the bulwark of Western containment policy.