Biographies of the Secretaries of State: Rex W. Tillerson (1952–) 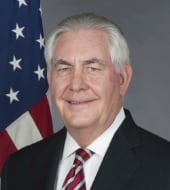 A native of Wichita Falls, Texas, Secretary Tillerson earned a Bachelor of Science degree in civil engineering at the University of Texas at Austin before joining Exxon Company, U.S.A., in 1975 as a production engineer. Secretary Tillerson rose through the ranks to become president of the corporation and a member of the board of directors in 2004, and served as ExxonMobil’s chairman and chief executive officer from 2006 to 2016.

Secretary Tillerson is a former member of the American Petroleum Institute and the National Petroleum Council, and was elected to the National Academy of Engineering in 2013. He formerly served as a trustee of the Center for Strategic and International Studies. He was also a member of the Business Roundtable and the Business Council, as well as an honorary trustee of the Business Council for International Understanding, and a member of the Emergency Committee for American Trade. He is a former director of the United Negro College Fund and a former vice-chairman of the Ford’s Theatre Society.