Biographies of the Secretaries of State: Edward Everett (1794–1865)

Edward Everett was appointed Secretary of State by President Millard Fillmore on November 6, 1852, and entered into duty on the same day. Although President Fillmore appointed Everett to succeed Daniel Webster, Everett was sworn in after Fillmore was defeated in his reelection bid, and served in the position for only four months, ending his service on March 3, 1853. 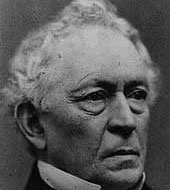 Everett was born in Dorchester, Massachusetts. Upon his father’s death at an early age, his family moved to Boston where he graduated from Harvard College in 1811. Like his father, Everett became a pastor for a Unitarian Church in Boston in 1814. Everett continued his education in Europe and received his Ph.D. from the University of Göttingen in 1817. Everett returned to Harvard in 1819 where he served as chair of Greek Literature for the following six years.

In 1825 he was elected to the U.S. House of Representatives where he served until 1835. The following year, he was elected Governor of Massachusetts and served four one-year terms.

As Webster’s successor, Everett had a relatively unremarkable and very short tenure. One of Everett’s first acts as Secretary was to draft a formal letter to the Emperor of Japan for the Perry Expedition, which facilitated Japanese trade with the West.

He was also charged with dispelling a potential diplomatic crisis with Peru over territorial claims to guano-rich Lobos Island.

The highlight of Everett's short-lived tenure was his contribution to shaping U.S. policy toward Cuba. Great Britain and France had proposed a tripartite guarantee of Spanish sovereignty over Cuba in 1852. Everett rejected the proposal, responding firmly that Cuba was to remain a U.S. matter and that the United States maintained its aversion to “entangling alliances.”

A respected orator and writer, Everett won praise for his apt expression of deep-rooted U.S. principles in foreign policy matters. When the new administration under Franklin Pierce began in March of 1853, Everett’s term as Secretary of State ended.

Upon his departure from the Department of State, he was immediately elected Senator from his home state of Massachusetts.