Biographies of the Secretaries of State: Hillary Rodham Clinton (1947–)

On January 21, 2009, Hillary Rodham Clinton was sworn in as the 67th Secretary of State of the United States. Secretary Clinton joined the State Department after nearly four decades in public service as an advocate, attorney, First Lady, and Senator. 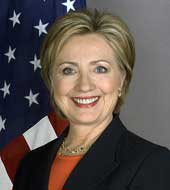 Secretary Clinton was born in Chicago, Illinois on October 26, 1947 to Dorothy Rodham and the late Hugh Rodham.

She attended local public schools before graduating from Wellesley College and Yale Law School, where she met Bill Clinton. In 1974, Secretary Clinton moved to Arkansas, a year later then married Bill Clinton and became a successful attorney while also raising their daughter, Chelsea. She was an assistant professor at the University of Arkansas School of Law, and after working to strengthen the local legal aid office, she was appointed by President Jimmy Carter in 1977 to serve on the board of the Legal Services Corporation, which she later chaired.

During her 12 years as First Lady of the State of Arkansas, she was Chairwoman of the Arkansas Education Standards Committee, co-founded the Arkansas Advocates for Children and Families, and served on the boards of the Arkansas Children's Hospital, and the Children's Defense Fund.

In 1992, Governor Clinton was elected President of the United States, and as First Lady, Hillary Clinton became an advocate of health care reform and worked on many issues relating to children and families. She led successful bipartisan efforts to improve the adoption and foster care systems, reduce teen pregnancy, and provide health care to millions of children through the Children's Health Insurance Program. She also traveled to more than 80 countries as a representative of our country, winning respect as a champion of human rights, democracy and civil society. Her famous speech in Beijing in 1995 -- when she declared that "human rights are women's rights, and women's rights are human rights" – inspired women worldwide and helped galvanize a global movement for women’s rights.

With Secretary of State Madeleine K. Albright, Secretary Clinton worked to launch the government’s Vital Voices Democracy Initiative. Today, Vital Voices is a non-governmental organization that continues to train and organize women leaders across the globe.

In 2000, Hillary Clinton made history as the first First Lady elected to the United States Senate, and the first woman elected statewide in New York. In the Senate, she served on the Armed Services Committee, the Health, Education, Labor and Pensions Committee, the Environment and Public Works Committee, the Budget Committee and the Select Committee on Aging. She was also a Commissioner on the Commission on Security and Cooperation in Europe.

As a Senator, Clinton worked across party lines to build support for causes important to her constituents and the country, including the expansion of economic opportunity and access to quality, affordable health care. After the terrorist attacks of September 11, 2001, she was a strong advocate for funding the rebuilding of New York and the health concerns of the first responders who risked their lives working at Ground Zero. She also championed the cause of our nation's military and fought for better health care and benefits for wounded service members, veterans and members of the National Guard and Reserves. She was also the only Senate member of the Transformation Advisory Group to the Department of Defense's Joint Forces Command.

In 2006, Senator Clinton won reelection to the Senate, and in 2007 she began her historic campaign for President. In 2008, she campaigned for the election of Barack Obama and Joe Biden, and in November, she was nominated by President-elect Obama to be Secretary of State.

Secretary Clinton is the author of best-selling books, including her memoir, Living History, and her groundbreaking book on children, It Takes A Village. She and President Clinton reside in New York.