Biographies of the Secretaries of State: Warren Minor Christopher (1925–2011)

Warren Minor Christopher was nominated Secretary of State by President William Jefferson Clinton in December 1992, confirmed by the U.S. Senate on January 20, 1993, and sworn in the next day. He served in the position for four years and ended his service on January 17, 1997. 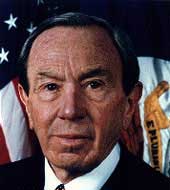 Christopher was born on October 27, 1925, in Scranton, North Dakota. Upon his father’s death at an early age, his mother moved the family to California. He earned a B.S. with honors from the University of Southern California in 1945 and entered Stanford University Law School in 1946 after completing service in the U.S. Naval Reserve. He received the L.L.B. from Stanford in 1949 and clerked for Supreme Court Justice William O. Douglas for a year.

As a lawyer between 1950 and 1967, he consulted on, and helped negotiate numerous international treaties for the Department of State. In 1965 he served on California Governor Edmund G. Brown’s Commission to investigate urban riots in Watts, California.

In 1967, President Lyndon Baines Johnson appointed him Deputy Attorney General of the United States, a position he held for two years. In 1977, President Jimmy Carter appointed him Deputy Secretary of State, a position he held for four years. He served as the Department of State’s Chief Negotiator during the Iran Hostage Crisis from 1979 to 1980. In 1992, after serving as head of the Commission investigating the Los Angeles Police Department, he served as the Head of President-elect Clinton’s Transition Team.

Christopher eschewed confrontation in favor of negotiation with friend and foe alike. He encouraged Israel, the Palestinians, and Jordan to sign peace treaties, resulting in the Oslo Accords and the Israel-Jordan peace treaty in 1993 and 1994 respectively. He promoted the Partnership for Peace Program, which advocated the expansion of NATO eastward into the former Soviet bloc nations, in 1994. In 1995 he convinced President Clinton to officially restore diplomatic relations with Vietnam. Later that year, he successfully conducted negotiations between Serbia and Bosnia that resulted in the Dayton Accords and the end of the Bosnian War.