Biographies of the Secretaries of State: Jeremiah Sullivan Black (1810–1883)

Jeremiah Sullivan Black served as Attorney General in President James Buchanan’s Cabinet until December 17, 1860, when he was chosen to succeed Lewis Cass as Secretary of State after Cass’s sudden resignation. He entered into duty on December 19, 1860, and served for the duration of the Buchanan administration, leaving office on March 5, 1861. 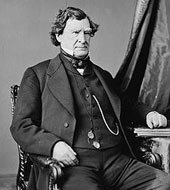 Black was born in Somerset County, Pennsylvania in 1810. He attended public schools and studied law in the office of Chauncey Forward, a renowned lawyer in western Pennsylvania. Black was admitted to the bar in 1830 and briefly took over Forward’s practice when he left for Congress. In 1831, he was appointed Deputy Attorney General for Somerset County.

A staunch Democrat and supporter of Andrew Jackson, Black befriended fellow Democrat James Buchanan early in his career, a move that would result in his eventual appointment as Secretary of State. In 1842, Black accepted an appointment as President Judge of the 16th Judicial District. He remained there until 1851, when he was elected to the State Supreme Court. Black served the first three years as Chief Justice and was reelected in 1854. At the end of his second term, newly elected President Buchanan appointed Black as Attorney General. When Secretary of State Lewis Cass resigned in the eleventh hour of the Buchanan administration, Black was commissioned Secretary of State.

The most pressing issue for the Buchanan administration in late 1860 was the threat of secession by the Confederate States. That December, President Buchanan declared the act of secession unconstitutional, based partly on former Attorney General Black’s legal arguments.

The new Secretary of State stood vehemently against secession, but also felt it was unconstitutional for the Union to force a state to remain. Black’s role as trusted adviser to the President changed little with his new appointment. With domestic political affairs in crisis, little attention was paid to international affairs during Black’s three-month commission.

One of the last acts of Black’s short tenure as head of the Department of State was undoubtedly his most important. On February 28, 1861, he instructed U.S. diplomatic representatives abroad to caution their respective governments against recognition of the Confederacy.

When President Lincoln was inaugurated in March of 1861, Black left office at odds with his fellow Democrats. He was appointed Reporter to the U.S. Supreme Court in 1861, a respectable, albeit lower office than he had held previously. Following a long and distinguished career in public service, Black returned to his private law practice in his home state of Pennsylvania, where he remained until his death in 1883.