Biographies of the Secretaries of State: Thomas Francis Bayard (1828–1898) 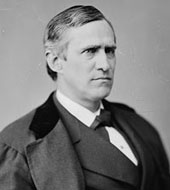 Bayard was born in Wilmington, Delaware on October 29, 1828. He attended law school in Flushing, New York, passed the bar in 1851, and thereafter began practicing law.

Bayard was appointed U.S. District Attorney for Delaware in 1853, but resumed private practice in 1854. In 1869, Bayard was elected as U.S. Senator from Delaware, and served until March 6, 1885, when he became Secretary of State under President Grover Cleveland. While in the Senate, Bayard also served on the Hayes-Tilden Electoral Commission in 1877. Following his tenure as Secretary, Bayard served as U.S. Ambassador to Great Britain from 1893 to 1897.

As Secretary of State, Bayard moved away from patronage appointments, choosing instead to appoint diplomats known for their skill and expertise rather than their political loyalty. However, controversy soon erupted when the Italian and Austro-Hungarian Governments rejected his appointment of Anthony M. Keiley as Minister.

In foreign affairs, Bayard intervened in the ongoing disputes over U.S. fishing rights in Canada and Newfoundland. Following the expiration of an 1871 agreement, the U.S. Government had attempted to negotiate a treaty with Canada and Great Britain in early 1888. However, the hunting of fur seals in the Bering Sea had become a contentious issue, and relations were further complicated by an unclear land and sea boundary division between Alaska and Canada. The U.S. Senate ultimately rejected the terms of the treaty. Bayard continued to pursue negotiations with the British Government, but the issue would not be resolved until a 1903 treaty.

In addition to addressing fishing rights, Bayard also focused on Pacific affairs. In 1887, he oversaw the Senate’s ratification of the renewal of a reciprocity treaty with Hawaii. That same year he hosted the inconclusive Washington Conference intended to de-escalate tensions between Germany, Great Britain, and the United States in competition for influence over Samoa. As Secretary, Bayard was also interested in increasing Japanese autonomy. Richard B. Hubbard, U.S. Minister to Japan, signed an agreement in 1889 with Japanese Minister of Foreign Affairs, Marquis Okuma Shigenobu, which provided for the gradual abolition of extraterritorial privileges for U.S. citizens living in Japan. However, Bayard acquiesced to British occupation of the Geomun-do Islands, despite Korean pleas for U.S. assistance under the terms of an 1883 treaty that had been negotiated by U.S. Envoy Robert W. Shufeldt.

After his tenure as Secretary of State, Bayard served as U.S. Ambassador to the United Kingdom. As Ambassador, Bayard became involved in the Venezuela-Guyana boundary dispute. His public, pro-British pronouncements placed him at odds with then Secretary of State, Richard Olney, and President Grover Cleveland. Bayard remained as Minister until the end of Cleveland’s second term in 1897.

Bayard retired, and died in Dedham, Massachusetts on September 28, 1898.