The Immigration Act of 1924 (The Johnson-Reed Act) 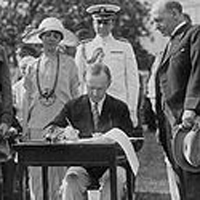 In 1917, the U.S. Congress enacted the first widely restrictive immigration law. The uncertainty generated over national security during World War I made it possible for Congress to pass this legislation, and it included several important provisions that paved the way for the 1924 Act. The 1917 Act implemented a literacy test that required immigrants over 16 years old to demonstrate basic reading comprehension in any language. It also increased the tax paid by new immigrants upon arrival and allowed immigration officials to exercise more discretion in making decisions over whom to exclude. Finally, the Act excluded from entry anyone born in a geographically defined “Asiatic Barred Zone” except for Japanese and Filipinos. In 1907, the Japanese Government had voluntarily limited Japanese immigration to the United States in the Gentlemen’s Agreement. The Philippines was a U.S. colony, so its citizens were U.S. nationals and could travel freely to the United States. China was not included in the Barred Zone, but the Chinese were already denied immigration visas under the Chinese Exclusion Act.

The literacy test alone was not enough to prevent most potential immigrants from entering, so members of Congress sought a new way to restrict immigration in the 1920s. Immigration expert and Republican Senator from Vermont William P. Dillingham introduced a measure to create immigration quotas, which he set at three percent of the total population of the foreign-born of each nationality in the United States as recorded in the 1910 census. This put the total number of visas available each year to new immigrants at 350,000. It did not, however, establish quotas of any kind for residents of the Western Hemisphere. President Wilson opposed the restrictive act, preferring a more liberal immigration policy, so he used the pocket veto to prevent its passage. In early 1921, the newly inaugurated President Warren Harding called Congress back to a special session to pass the law. In 1922, the act was renewed for another two years.

When the congressional debate over immigration began in 1924, the quota system was so well-established that no one questioned whether to maintain it, but rather discussed how to adjust it. Though there were advocates for raising quotas and allowing more people to enter, the champions of restriction triumphed. They created a plan that lowered the existing quota from three to two percent of the foreign-born population. They also pushed back the year on which quota calculations were based from 1910 to 1890.

Another change to the quota altered the basis of the quota calculations. The quota had been based on the number of people born outside of the United States, or the number of immigrants in the United States. The new law traced the origins of the whole of the U.S. population, including natural-born citizens. The new quota calculations included large numbers of people of British descent whose families had long resided in the United States. As a result, the percentage of visas available to individuals from the British Isles and Western Europe increased, but newer immigration from other areas like Southern and Eastern Europe was limited.

The 1924 Immigration Act also included a provision excluding from entry any alien who by virtue of race or nationality was ineligible for citizenship. Existing nationality laws dating from 1790 and 1870 excluded people of Asian lineage from naturalizing. As a result, the 1924 Act meant that even Asians not previously prevented from immigrating – the Japanese in particular – would no longer be admitted to the United States. Many in Japan were very offended by the new law, which was a violation of the Gentlemen’s Agreement. The Japanese government protested, but the law remained, resulting in an increase in existing tensions between the two nations. Despite the increased tensions, it appeared that the U.S. Congress had decided that preserving the racial composition of the country was more important than promoting good ties with Japan.

The restrictive principles of the Act could have resulted in strained relations with some European countries as well, but these potential problems did not appear for several reasons. The global depression of the 1930s, World War II, and stricter enforcement of U.S. immigration policy served to curtail European emigration. When these crises had passed, emergency provisions for the resettlement of displaced persons in 1948 and 1950 helped the United States avoid conflict over its new immigration laws.

In all of its parts, the most basic purpose of the 1924 Immigration Act was to preserve the ideal of U.S. homogeneity. Congress revised the Act in 1952.