But the neglectful attitude toward foreign relations characteristic of the interwar years, changed rapidly after the start of the Second World War. The undeniable menace of the Axis—Nazi Germany and its partners Italy and Japan—forced the United States to pursue an interventionist policy. Despite an official stance of neutrality, President Franklin D. Roosevelt authorized the sale of destroyers to Great Britain in return for leases on some Western Atlantic bases and eventually provided wholesale economic assistance to the United Kingdom and the Soviet Union through the Lend-Lease Act of 1941. 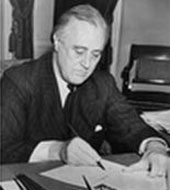 As the Nazis began the systematic persecution of Jews first in Germany and then later in occupied Europe, the United States faced a major crisis in refugee policy. Even though the nation admitted more refugees from Nazi tyranny than any other country, the United States had the capacity to admit many more. But the American public was still isolationist and anti-Semitic—and preoccupied with domestic economic problems. Since Americans were apathetic toward the plight of the refugees, there was little chance of persuading Congress to increase the existing national origins quotas. Although President Roosevelt was sympathetic, he did not use his office to implement changes in U.S. refugee policy.

The Department of State, mirroring the public mood, also failed to lead on the issue, and anti-Semitism influenced policy at a key level. An historian of the refugee crisis has concluded, “The Department of State compiled a dismal record. It discouraged or actively opposed virtually all efforts for a more generous American policy . . . It obstructed the emergency visa program for political refugees. And it tolerated consuls whose anti-alien, anti-Semitic, and politically conservative attitudes influenced their decisions in visa cases.”